Several years ago all risks not complying with the definition of market or credit risks were included amongst operational risks. This vague and strictly speaking, negative definition was completely unable to correct and efficiently manage the operational risks. The ground of a risk measurement is to understand the risks’ nature, potential sources and possible consequences, and this is something that cannot be done without clear and precise definition.

BASEL II (International Convergence of Capital Measurement and Capital Standards) defines operational risk as “a risk of loss resulting from inadequate or failed internal processes, people and systems or from external events”. This risk management standard is intended for banks and other financial institutions, where the term “operational” risk is well known and already settled.

The objective of both measurements is to quantify a predetermined value, which represents the risk level, the extent of risk reduction or the number (or percentage) of accepted risk. In an ideal risk management environment the benefits of operational risk measurement should also be included in the process. The possibility to quantify the effectiveness of implemented security controls and/or the increase of security level should be in the portfolio of all risk managers. However measuring the benefits of operational risk treatment is not an easy task, furthermore current tools and methods used are restricted to simple Excel tables.

While risk analysis comprised an important part of the project, the main objective was to establish and implement a process of operational risk measurement in the Slovak bank. The risk management process had to be in compliance with the Act No. 12/2004 mentioned above. The executed risk analysis was the first step that helped to estimate the current risk levels. The process also included adaptation of a proven methodology and establishment of repeatable steps to manage operational risks. Implementation of comprehensible and transparent metrics to measure operational risk values and the level of their treatment was a self-evident part of the job.

There were several important parameters, mainly based on experiences collected by American experts [6], these metrics had to accomplish. Each metric used had to be:

- Measured in a consistent way, without any subjective criteria – even if more than one person uses the metrics identical results will be obtained;
- Easily fulfilled, optimally in an automatic way;
- Expressed in cardinal numbers or percentages, and not in the qualitative scale “low”, “medium”, “high”;
- Expressed in the same unit, e.g. hours, incidents, financial losses.

Global metrics to measure the level of risks and the level of risk treatment were prepared in the first phase. Subsequently other, more detailed metrics focused on specific operational risks and vulnerabilities (e.g. password strength in individual systems, security incidents) and also metrics focused on compliance with the ISO/IEC 27001 standard, were implemented. All metrics were developed in a way that enables easy and fast collection of data and is as automatic as possible.

Secondary objective for the year 2008 is to prepare an interface for the RMA and RiskBusiness KRI Framework Study methodology, used by the bank as a primary approach to risk management to reach the compliance with BASEL II requirements.

Value, or as it is also called measure of risk, was the first result from the performed risk analysis using qualitative methodology. Possible impacts of security violations on the bank’s activities and on reaching their business goals were estimated in the first part of the analysis. Probability that security violations would occur was estimated by assessing levels of threats and ICT vulnerabilities.

The metric used to express measure of risk was on the scale from 1 to 7, altogether 27,893 values of risk were calculated. This number, however as immense as it may seem, includes all possible combinations of identified impacts, probabilities and bank’s assets. From the operational risk perspective only 21 risks were assessed, these risks were primarily presented to management at the end of the project.

The above graph shows the risk value on the scale from 1 to 7 and its characteristics, ergo the ratio of an individual risk’s component (the first being impact and the following two are probability components –the first of the two is the level of threat and the second is the vulnerability each is expressed in different colors) and how they contribute to overall risk.

Upon finishing the analysis part of all risks were evaluated against pre-established criteria and it was then decided whether they were to be accepted, treated or avoided.

For those risks that were not acceptable or couldn’t be avoided countermeasures which treat (reducing their consequence or the likelihood of the risk) specific operational risks were proposed. Existing countermeasures were considered while proposing new sets of controls. Assessing the current status of controls was an important factor later used to make decisions on the priorities of the risks and the sequence in which they would be  treated. The methodology used contains an extensive list of countermeasures offering numerous recommendations on how to deal with individual risks (treatment options).

The results of recommended security controls evaluation is shown in the graph below (again in the form of management summary). 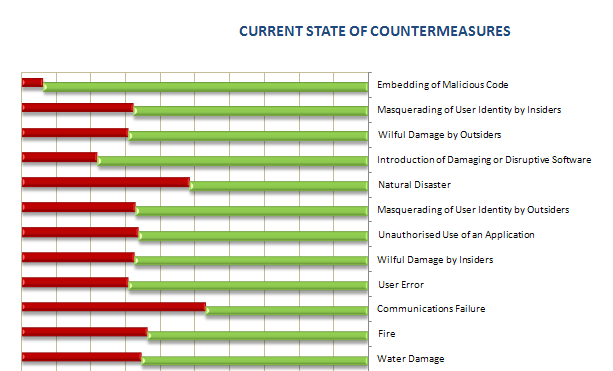 The big picture about the state of security in the bank is stressed by placing the graphs against each other. When presenting the results of the analysis both metrics were presented simultaneously to give uniform view both on the operational risk and at the same time on the level of its treatment.

The very first risk presented in the graph above reached the measure of 5 (on the scale from 1 to 7) and is covered by 93%. This approach thus in a transparent way fulfills two basic processes of measurement – the value of operational risk and the level of its treatment. With respect to its transparency the results were presented in this simple way, no intricate situation occurred and results were easily and clearly presented to the management.

However the security controls were not only assessed in the way presented above, binary green-red. The risk analysis methodology used enables the reviewer to select from more statuses the recommended countermeasures are currently in.

Some of the countermeasures that were initially recommended to cover specific operational risk which were later marked as an Acceptable level of risk. It was decided that however contributive the countermeasure could be it will not be implemented for some varying reasons. In such cases the risk remained partly not treated and it was necessary to determine whether the remaining risk was not higher than the preset acceptable level of 8% (in reality the level of 4.11 % was acceptable).

Selected controls were also marked as Not Applicable where the proposed actions to raise the security level were not technologically viable or were against the core business goals of the bank. Controls that weren’t in place, but their implementation have not been finished yet (projects were in progress), were marked as Implementing recommendation.

Using other statuses of security controls more detailed metrics were prepared, these metrics presented more detailed views on the information security within the bank. The process of operational risk treatment was correctly established, however some risks exists that still needed to be treated (red column). The graph also shows the expected progress in the implementation of new controls, these were implemented during the execution of the analysis (altogether the analysis lasted 5 months). 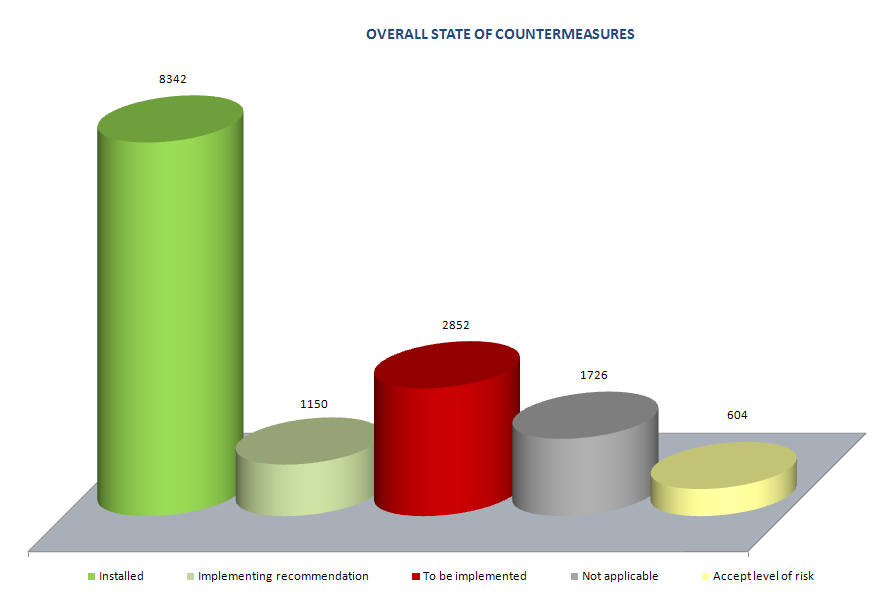 The following graph depicts individual security areas and the ratio of implemented, not applicable, recommended and other security controls. 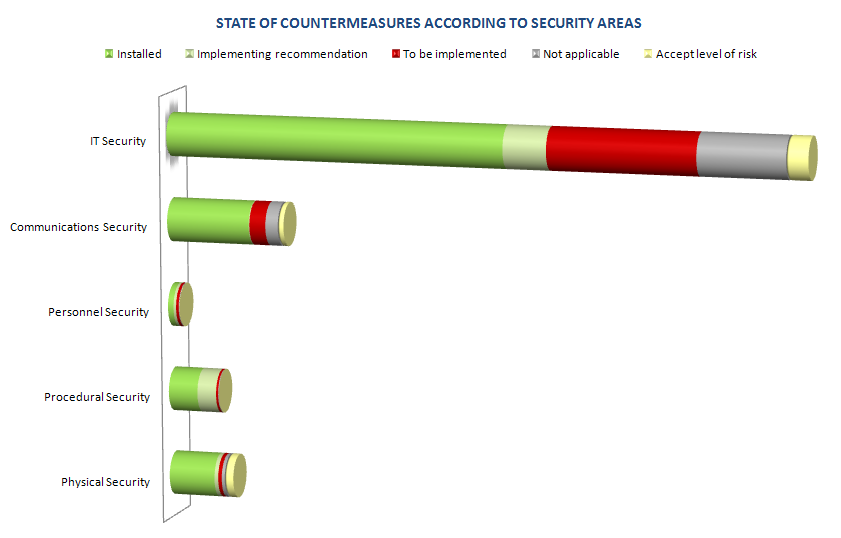 Each of the metrics described above is based on thousands of values collected, due to the level of its analytical detail these values couldn´t be presented. The objective of these simplified graphs was to show the results of the analysis and the level of operational risks treatment in an easy and comprehensive way. Based on four parameters of metrics, selected at the beginning of the project, each graph was constructed so it will be in the future easily updated with minimal effort. The procedures for the continuous data collection were developed to enable the risk treatment level to be assessed in time. 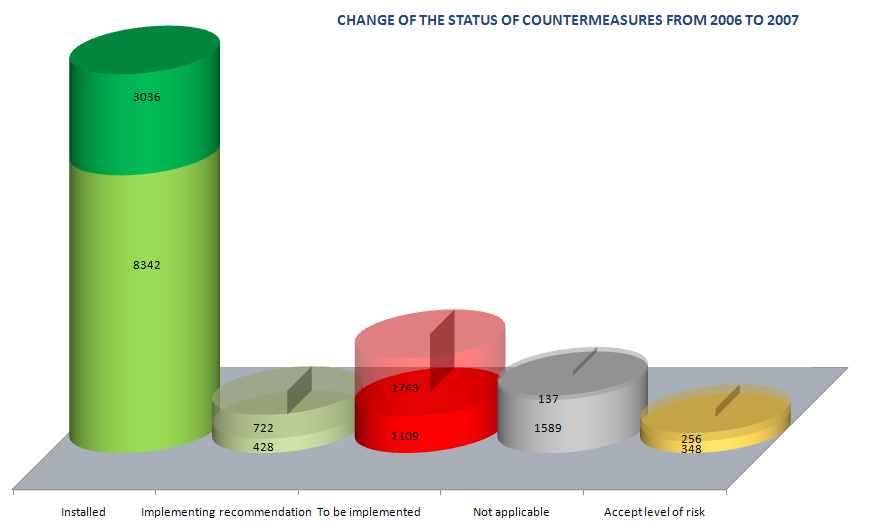 The graph displays how the number of implemented controls has increased in time, i.e. the risk treatment process was improved. Other states of countermeasures decreased and the overall number of controls also changed. The process also identified new risks as well as changes in the information system. As part of the change management process security impacts were assessed and an optimal set of countermeasures to cover newly identified operational risks were recommended.

The final implementation of recommended countermeasures is never an easy task, the best approach has shown to be the development of the set of implementation projects, to be realized by a bank’s staff. For example it is more difficult to increase the level of security of the SAS authentication system than to execute a project of “Smart Cards Implementation in the SAS system”, although in reality these are identical projects. The problem is usually in the allocation and approval of financial resources for the project. To find a sponsor for the implementation of security countermeasures is, in financially oriented institutions such as banks, almost an impossible task. On the other side to find a project sponsor is also intricate and tedious, however not an impossible task.

- Log Management – acquisition and implementation of a solution for continuous assessment of specific applications and system logs;
- Two-factor authentication for VPN - acquisition and implementation of two-factor authentication objects for VPN connection;
- IPS and IDS systems – increasing the effectiveness of IPS (Intrusion Prevention System) and IDS (Intrusion Detection System) for the automatic detection of security intrusion and raising alarms;
- Disaster recovery plans – preparation of disaster recovery and business continuity plans for all critical systems within the bank;
- Handling the media – establishment and implementation of procedures for manipulation with media (tapes, CDs, DVDs, flash memory cards, etc.).

The corner stone of the operational risks measurement is to implement a consistent methodology or to use a sufficiently transparent interface in between different methodologies and tools. It is necessary to develop such metrics, which will be easily comprehensible and will enable fast and easy determination of risks levels and the levels of their treatment in time, and thus enable tracking of risk trends or perform periodic benchmarking.

Operational risks measurements, as well as other measurements of security, are a new area that will be more and more pronounced. The time has moved to an era where many of “IT driven” companies have implemented information security management systems and learned how to measure the level of risks. The contribution of security changes in risks treatment levels or security progress at this time are, so far, abilities which only a few security managers have at their disposal.  One of the main reasons is ignorance of the measurement processes and little knowledge about security metrics, their preparation, usage and effective presentation. The highly anticipated new international standard, ISO/IEC 27004 - Information Security Management Measurements, should bring more light into the area of security metrics and the overall process of measurement. Meanwhile several, more or less usable, standards and publications are available, see bibliography below.

The article was published in ISACA Jurnal Online in 2008 and presented on Information Security Summit 2008.

View all posts by: Jan Mikulecký